A disabled man and a 77-year-old retired patent attorney worked together to launch an improved neck brace for people that need more support and flexibility than traditional soft-foam collars offer.

Neck Brace - Also known as a cervical collar, is an orthopedic medical device used to support a persons's neck and head. A neck brace can be used by emergency personnel for victims of traumatic head or neck injuries, and is used to treat some chronic medical conditions.

Scottsdale resident Shane Peters spent more than a year perfecting a brace made of stiff, yet flexible synthetic tubing that holds the head in an upright and natural position. He made the brace after doctors told him he could not wear a traditional soft-collar brace, which can weaken neck muscles when worn for extended periods.

His invention wouldn't be for sale today without the help of attorney Don Flickinger, who guided Peters through the rules and regulations of the U.S. Patent and Trademark Office.

The partnership resulted in substantial savings for Peters, as those looking to launch new products often spend thousands of dollars to get their inventions patented and marketed. Flickinger was able to steer Peters toward a simpler, provisional patent process. The provisional patent allows Peters to sell his brace for one year until a regular patent must be filed. Peters began selling the product via the Internet last month.

Among other things, Peters credits Flickinger for saving him the $1,600 he would have spent to have someone help him describe his product, a requirement for a provisional patent. 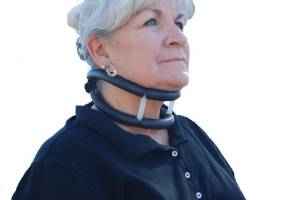 Picture of the new neck brace

"He referred me to someone for the drawings, but the description I couldn't figure out. There's a lot involved," Peters said. "He walked me through the whole process, because I would never have been able to do it on my own."

Peters has Tardive dyskinesia, which causes repetitive, involuntary body movements such as grimacing. Patients also may move their jaws up or down as if they are chewing. The condition is a side effect from the antipsychotic medication he took for years, Peters said.

"It made my neck collapse," Peters, 44, said, adding he also has been diagnosed with severe torticollis, a stiffening of the neck that causes pain similar to a charley horse in the leg. The pain draws the head to one side with the chin usually pointing to the other side.

For his part, Flickinger, of Peoria, said he wanted to do Peters a favor in keeping him from turning to invention-promotion firms, which he says can take advantage of their clients.

"The average client is going to spend $10,000 to $20,000," he said. "Their success rate, and by success rate, I mean does the inventor make more than what he paid them to do it for them, is substantially less than 1 percent. It's a $500 million a year business. Why do we need them"

Peters heard Flickinger speak at an entrepreneurship seminar a year ago. Flickinger was a then-volunteer of Phoenix SCORE, a non-profit group made up of mostly of retirees with real-world experience who offer free business advice.

I've always figured one should be the best one can be and then help somebody else," said Flickinger, a registered patent agent and member of the Federal Bar Association, positions that allow him to practice before the U.S. Patent and Trademark Office. He retried in 1962.

Flickinger met with Peters for several hours on as many as four occasions. The two worked together so Peters could prepare for the provisional patent using a short-form application the inventor can write himself. It shows what the invention is and how it's made and used.

"It's just drawings and a written description of the drawings," Flickinger said. "I coached him through how to prepare and file that. The only thing it costs is $110 for the government fee. That's all they spend instead of several thousand for regular patent applications."

During the yearlong provisional patent, the entrepreneur must do research and development and test the commercial feasibility of the invention.

"By the end of the year... you have to go see an attorney and have a regular utility application filed, but you've had all this time to investigate the commercial feasibility of it," Flickinger said.

Like any good salesman, Peters has testimonials on the website, including one from Charles Harmston, a physician's assistant in Tempe who has treated Peters for six years.

Peters has worn one of the braces he made for the past several months and is now able hold his head erect, and feel more confident, Harmston says on the site.

"In my observation over the past several months, he definitely has improved, has described less discomfort in his neck, and has a better outlook on life," he wrote. "It appears that he has a good product that can help other people with this condition, or for any condition that a good supportive neck brace would be needed."

The brace holds the head in a normal position while giving the head full range of motion. It is effective for recovery from almost any neck injury and neck-strain problem, including whiplash, Peters said.

Peters is hopeful that his unlikely pairing with Flickinger will pay off.

But while Flickinger hopes the brace is a success, he has no financial stake in the product, because he offered his services without requiring a share of the profits.

"He put in so much more work than he had to," Peters said.

Peters' neck brace sells for $69.99 and can be ordered at shanesneckbrace.com

• Disabled World is strictly a news and information website provided for general informational purpose only and does not constitute medical advice. Materials presented are in no way meant to be a substitute for professional medical care by a qualified practitioner, nor should they be construed as such. Any 3rd party offering or advertising on disabled-world.com does not constitute endorsement by Disabled World.

• Please report outdated or inaccurate information to us.