British Sign language (BSL) is a visual-gestural language which makes use of three dimensional space and the movement of hands (and other parts of the body) to convey meaning. It has its own vocabulary and syntax.

An aid to understanding it can be helped by understating the processes of spoken language.  Spoken language involves the use of the oratory faculties to produce sounds mapped against specific words and grammatical combinations. The oratory elements are then received by the auditory faculties and processed accordingly. British sign language however, makes use of the visual faculties as opposed to the auditory faculties. In the same way that spoken language makes use of rules to produce comprehensive messages, British Sign Language is also governed by a complex grammar which allows both the tangible and the non tangible to be discussed thoroughly.

Contrary to the beliefs of significant parts of the speaking population, British Sign Language is not a mixture of arbitrary signs modeled solely on the visual referent.

British Sign Language has fought a difficult battle throughout history - a battle which is still being fought today.

The following information will give an overview of the language and some of the battles that it has had to endure throughout history.

One of the first official historical record of BSL dates back to 1576, when a wedding ceremony was conducted in sign language in Leicester.

The 18th and 19th Centuries appear to have been a far more positive time in history for individuals using it. Examples of events during this period are as follows: 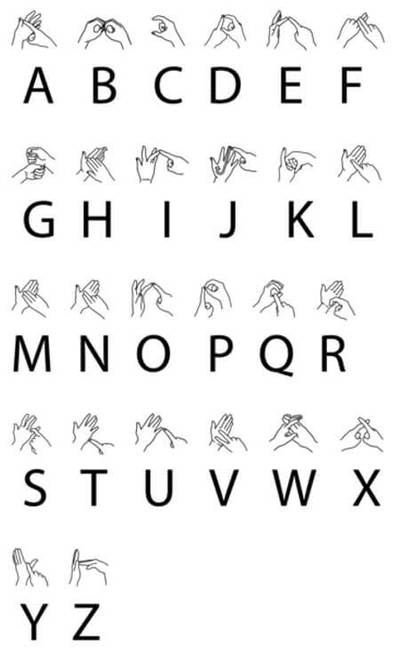 Hand depictions of letters of the alphabet in British Sign Language (BSL).

Unfortunately, the history of sign language takes a negative turn at this point in history.

From the 1860's onwards, oralism became popular in Deaf education and as such a number of Oral only schools were established.

Twenty years later, delegates at the Conference of Educators of the Deaf, voted to implement oralism as the sole method in schools.

At this point, life became difficult for significant numbers of Deaf children.

Forbidden to use sign language, and as such unable to express themselves and engage fully in learning opportunities the potential and well being of many Deaf children became stunted at the best and inhumanely violated at the worst.

The History of the Deaf did not start to take a more positive direction until 1974 when it was agreed that British Sign Language is a language in its own right. From this point, great attention and respect became generated for it from broader society and Deaf people became better able and equipped to express themselves in the educational arena. As such, the acceptance of BSL as a viable and positive language and method of communication, presented the catalyst for Deaf children to be able to achieve both personally and educationally.

The fights for British Sign language which have been fought throughout history have still not ended however.

Although 2003 saw the British Government recognizing British Sign Language as a language in its own right, they have yet to give it legal status. As such, the accessibility to necessary information and literature which the hearing population take for granted (such as health, legal, benefits and employment information) is not automatically made available in the necessary formats to the Deaf population. As such, this is a fight that continues to be fought...

In the last few years, there has been an increasing amount of interest in British Sign Language (BSL). Here are 6 quick facts for the beginner and newbies to BSL: