life expectancy and variation of individual lifespans tightly bound together by mathematical relationship.

On average, as lives get longer, the difference in the age at which people die becomes smaller. By analyzing data from 44 countries, researchers have now proven that life expectancy and the variation of individual lifespans are tightly bound together by a mathematical relationship. If life expectancy decreases in times of crisis, then, according to the same mathematical logic, the distribution of the lengths of lives widens.

"Since life expectancy very probably continues to rise, we can expect that fewer people have to die earlier than the average," says Alexander Scheuerlein, scientist at the Max Planck Institute for Demographic Research (MPIDR) in Rostock, Germany. Scheuerlein has now published these results on lifespans together with MPIDR director James Vaupel and an international team of researchers in the science journal PNAS.

Fewer people have to die prematurely

Among women in the US, the effect accounts for a compression of mortality by ten years between 1933 and 2014 (see graph). In 1933, American women had a life expectancy of 62.8 years, while half of all deaths occurred within a time span of 26.3 years around the average age of death. In contrast, by 2014, life expectancy had risen by almost 19 years to up to 81.3 years, while the time span that half of all deaths occurred in had shrunk to only 16.3 years. 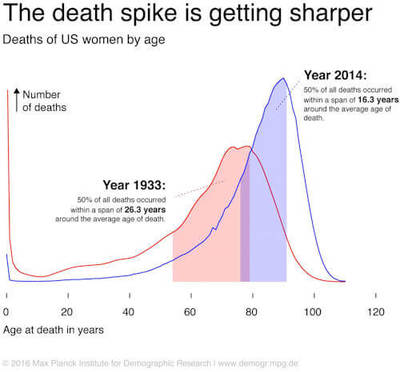 While life expectancy of US women rose by almost 19 years between 1933 and 2014 (from 62.8 to 81.3 years), the variance in the distribution of deaths over age shrank by ten years. Data: Human Mortality Database - Graph Credit: MPI for Demographic Research

One rule for vastly different societies

This relationship between life expectancy and the converging of the ages at death can be observed not only over time within a single country, but across very different countries, historical epochs, and societies--and between men and women. No matter which types of populations the researchers compared, they always found a fixed relationship between the difference in life expectancy levels and the difference in the variance in the distributions of deaths over age.

The same mathematical conditions apply even to extreme cases. For example, this is true for modern Japanese women, who hold the world record with a life expectancy well beyond 80 years. It also applies to traditional hunter-gatherer societies (with a life expectancy around 40 years), and the historic population of freed US slaves in Liberia, who temporarily had an average lifespan of only a few years.

Given the diversity of the human populations who appear to be governed by this newly discovered rule, it is not yet possible to determine its causes, Scheuerlein says. "The universality of the relationship is striking. The only thing that is obvious to us right now is that it must have to do with the sociocultural way humans organize their societies."

The PNAS study confirms recent research which suggests that gains in life expectancy are to be expected at higher ages, Scheuerlein points out. In the past, individual lifespans have been more diverse mainly due to high infant mortality. Deaths had accumulated in two distinct age groups, that of early childhood and, for those who survived, that of adulthood. As the centers of these groups had been quite distant, it was no surprise that when infant mortality decreased to almost zero, the variation of lifespans shrunk and life expectancy rose at the same time.

Meanwhile infant mortality has been at sustained low levels for many years, and the vast majority of deaths is centered around higher ages. Nevertheless, recent developments also follow the newly discovered rule. The age range within which most deaths occur is still becoming narrower, even though the time span for this process has already become considerably smaller than in the past and now takes place later on in the second half of life. Simultaneously, life expectancy continues to reach ever-higher values. "Our newly discovered rule adds to a growing body of research that does not give any evidence that humans are approaching a looming limit to life expectancy," says Scheuerlein.

• Disabled World is strictly a news and information website provided for general informational purpose only and does not constitute medical advice. Materials presented are in no way meant to be a substitute for professional medical care by a qualified practitioner, nor should they be construed as such. Any 3rd party offering or advertising on disabled-world.com does not constitute endorsement by Disabled World.

• Please report outdated or inaccurate information to us.