Synopsis: Autism Spectrum Disorder (ASD) is the terminology for conditions that include Autistic disorders, Rett's syndrome, Asperger's syndrome, childhood disintegrative disorders, Pervasive developmental disorders - Not otherwise specified (PDD-NOS). Autism is thought to be present soon after birth, with the disorder's characteristics becoming apparent in the first three years of life. People with autism often have difficulties with communication and social interaction and display restricted repetitive patterns of interest and activity. A few people with higher functioning autism may have extraordinary creative or artistic skills and abilities.

Autism spectrum disorder (ASD) is a developmental disability caused by differences in the brain. Some people with ASD have a known difference, such as a genetic condition. Other causes are not yet known. People with ASD may behave, communicate, interact, and learn in ways that are different from most others. ASD begins before the age of 3 years and can last throughout a person’s life, although symptoms may improve over time. The abilities of people with ASD vary significantly.

This article is from our digest of publications relating to Neurological Disorders that also includes:

Autism spectrum disorder (ASD) and schizophrenia (SCZ) have complex inheritance patterns, with multiple genetic and environmental factors influencing disease risk. Sufficient evidence has shown that genetic factors contribute substantially to the etiology of both disorders. Although ASD and SCZ are clinically distinct disorders, evidence suggests that genetic overlap exists. These disorders co-occur at a higher rate than would be expected in the general population (Chisholm et al., 2015). A large epidemiological study showed that a family history of SCZ in first-degree relatives is a risk factor for ASD (Sullivan et al., 2012) - https://www.cell.com/cell-reports/fulltext/S2211-1247(18)31293-2

People with autism have difficulties with communication and social interaction and display restricted repetitive patterns of interest and activity. Autism is thought to be present soon after birth, with the disorder's characteristics becoming apparent in the first three years of life.

Autism seems to be on the rise, and autism spectrum disorders affect between two and six children out of every 1,000 in the U.S. It's unclear whether the growing incidence of autism represents a real increase or just improved detection. 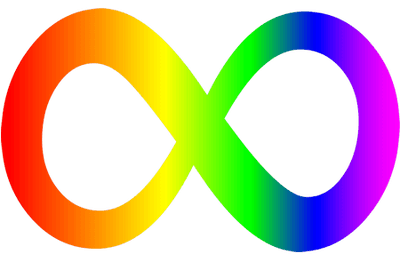 The rainbow-colored infinity symbol represents the diversity of the autism spectrum as well as the greater neurodiversity movement.

People with Asperger syndrome have social deficits and restricted patterns of interest and activity similar to people with autism. However, they do not have an intellectual disability, and their language and cognitive skills development appear normal, at least in the first two years of life.

Formal recognition and diagnosis of Asperger syndrome usually occurs later than for autism. It is thought that it is probably because the person's social deficits don't become apparent until they spend time in social settings, such as kindergarten or school.

Signs of Rett syndrome that are similar to autism.

The signs of this disorder are most easily confused with those of Angelman syndrome, cerebral palsy and autism. It affects females almost exclusively. Rett syndrome is caused by mutations (structural alterations or defects) in the MECP2 (pronounced meck-pea-two) gene, which is found on the X chromosome.

Girls with Rett syndrome are prone to gastrointestinal disorders, and up to 80% have seizures. They typically have no verbal skills, and about 50% of females are not ambulatory.

Scoliosis, growth failure, and constipation can be problematic.

Rett Syndrome signs may stabilize for many decades, particularly for interaction and cognitive functions such as making choices. Anti-social behavior may change to highly social behavior.

Motor functions may slow as rigidity and dystonia appear.

Seizures may be problematic, with a wide range of severity.

Scoliosis occurs in most and may require corrective surgery. Those who remain ambulatory tend to have less progression of scoliosis.

The main treatment goals are to lessen associated deficits and family distress and improve quality of life and functional independence.

Disabled World provides general information only. The materials presented are never meant to substitute for professional medical care by a qualified practitioner, nor should they be construed as such. Financial support is derived from advertisements or referral programs, where indicated. Any 3rd party offering or advertising does not constitute an endorsement.