Synopsis: Naegleria fowleri is a microscopic amoeba that can cause a rare and devastating infection of the brain called Primary Amebic meningoencephalitis. Naegleria fowleri has three stages to its life cycle; ameboid trophozoites, flagellates, and cysts. Naegleria fowleri commonly infects people when contaminated water enters their bodies through their noses.

Naegleria fowleri, also referred to as the, brain-eating amoeba, is a free-living microscopic amoeba. It may cause a rare and devastating infection of the brain called, Primary Amebic Meningoencephalitis (PAM).

The amoeba is usually found in warm freshwater and soil. Naegleria fowleri commonly infects people when contaminated water enters their bodies through their noses. After the amoeba enters a person's nose, it travels to their brain where it causes PAM - a condition which is usually fatal. Infection usually happens when people go swimming or diving in warm freshwater places such as rivers and lakes. In rare instances, Naegleria infections might also happen when contaminated water from other sources such as inadequately chlorinated swimming pool water, or heated and contaminated tap water, enters a person's nose. You cannot become infected from drinking water contaminated with Naegleria. 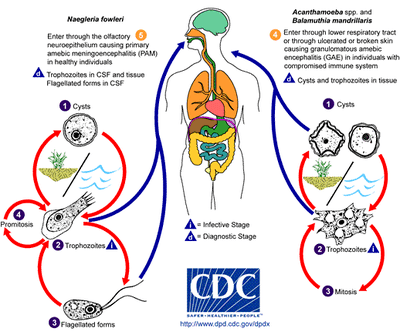 Naegleria fowleri has three stages to its life cycle; ameboid trophozoites, flagellates, and cysts. The only infective stage is the ameboid trophozoite. Trophozoites replicate by binary division during which the nuclear membrane remains intact. Trophozoites infect people and animals by penetrating the nasal tissue and migrating to the brain through the olfactory nerves, causing primary amoebic meningoencephalitis or, 'PAM.'

Trophozoites can turn into a temporary and non-feeding flagellated stage when stimulated by adverse environmental changes, such as a reduced food source. They revert back to the trophozoite stage when favorable conditions return. Naegleria fowleri trophozoites are found in cerebrospinal fluid (CSF) and tissue, while flagellated forms are occasionally found in CSF. Cysts are not seen in brain tissue. If the environment is not conducive to continued feeding and growth, the amoeba or flagellate will form a cyst. Cysts are environmentally resistant in order to increase the chances of survival until better environmental conditions exist.

Primary amoebic meningoencephalitis (PAM) is a disease involving a person's central nervous system. PAM is caused by Naegleria fowleri, a free-living amoeba. It is a rare disease that is nearly always fatal. Only three people in America out of 132 have survived infection.

The signs and symptoms of Naegleria fowleri infection are similar to bacterial meningitis, which lowers the chances of initially diagnosing PAM. People become infected when water containing Naegleria fowleri enters the nose and the amoeba migrates to the person's brain along the olfactory nerve. People do not become infected from drinking contaminated water. The symptoms begin 1-7 days after swimming or other nasal exposure to Naegleria-containing water. People die 1-12 days after the symptoms begin. PAM is hard to detect because the disease progresses quickly so that diagnosis is usually made after the person has died. The signs and symptoms of infection include the following:

Stage One: Stage one of the infection involves signs and symptoms including a fever, nausea, vomiting and a severe frontal headache.

The disease is usually fatal, although there have been four survivors - three from America and one from Mexico. The original American survivor's condition gradually improved during a one-month hospitalization. The only reported side-effect to treatment was a reduction in leg sensation for two months after discharge; the symptoms gradually improved. There was also no detection of Naegleria fowleri three days after treatment. It has been suggested that the original survivor's strain of Naegleria fowleri might have been less virulent, contributing to the person's recovery. In lab experiments, the survivor's strain did not cause damage to cells as rapidly as other strains, suggesting that it was less virulent than strains recovered from fatal instances.

The condition of the survivor from Mexico did not start to improve until forty hours after hospital admission. On day twenty-two of admission, there was no abnormality shown in the person's brain scan and the person was discharged the next day. The person was followed up for the next year without any recurrence of the disease.

Thirty-five years passed without a Naegleria survivor in America, but during the summer of 2013 two children with the disease survived. The first was a twelve year old girl who was diagnosed with PAM around thirty hours after becoming sick and was started on the recommended treatment within thirty-six hours. She also received the investigational drug, 'miltefosine,' and her brain swelling was aggressively managed with treatments that included therapeutic hypothermia. She made a complete neurologic recovery and went back to classes at school. Her recovery has been attributed to early diagnosis and treatment and novel therapeutics.

The second child was an eight year old considered to be a PAM survivor, although he experienced what is likely permanent brain damage. He was also treated with miltefosine, yet was diagnosed and treated several days after symptoms started. He did not receive therapeutic hypothermia treatment. Overall, the outlook for those who get this disease is poor, although early diagnosis and new types of treatments may increase a person's chances of survival.

Primary amoebic meningoencephalitis (PAM) is diagnosed using specific lab tests available in only a few labs in America. Due to the rarity of the infection and difficulty in initial detection, approximately 75% of diagnosis are made after a person has already died. PAM and Naegleria fowleri infection can be diagnosed in the lab by detecting the following:

Some different methods exist to test for Naegleria fowleri. The methods include direct visualization, antigen detection, polymerase chain reaction, environmental detection and amoeba culture. The methods are described below:

Water samples can be collected, concentrated and put into culture to grow and select for Naegleria fowleri. Samples can be tested using molecular or serologic methods.

A specific antibody to Naegleria fowleri may be used along with another antibody that deposits a chemical or glows under specific types of lights to directly stain the amoebic antigens in tissue.

The motile amebae may often be seen moving quickly under a microscope when looking at a fresh sample. The amebae can also be stained with a variety of stains such as a modified trichrome stain, or Giemsa-Wright stain.

Specific molecular tools can amplify DNA from the amebae in cerebrospinal fluid or tissue to specifically identify if the amebae are present. Examining strains or subtypes of Naegleria fowleri can be done, yet little is known about the natural populations in the environment, making it hard to interpret what the findings mean.

The amebae can be grown in culture to increase the likelihood of detecting the amoeba by direct visualization or PCR. The sample is added to a growth plate covered in bacteria that can serve as a food source for Naegleria fowleri. The initial screening is accomplished by incubating the plate at a higher temperature that kills most free-living amebae while selecting for heat-loving amebae such as Naegleria fowleri or other amebae.

The initial screen shows up as tracks made by an amoeba as it moves across the plate eating the bacteria. If there are no amebae on the plate grown at the higher temperature, then Naegleria fowleri are not present. If heat-loving amebae are present on the plate grown at higher temperature, these amebae undergo further specific testing to determine whether Naegleria fowleri is present, since other free-living amebae can also be heat-loving.

Thomas C. Weiss is a researcher and editor for Disabled World. Thomas attended college and university courses earning a Masters, Bachelors and two Associate degrees, as well as pursing Disability Studies. As a Nursing Assistant Thomas has assisted people from a variety of racial, religious, gender, class, and age groups by providing care for people with all forms of disabilities from Multiple Sclerosis to Parkinson's; para and quadriplegia to Spina Bifida.