Synopsis: News and information regarding medical marijuana and cannabis use by humans for pain, psychological, and medicinal purposes.

What is Medical Cannabis?

Medical Cannabis, also known as Medical marijuana, refers to the use of cannabis and its constituent cannabinoids, such as tetrahydrocannabinol (THC) and cannabidiol (CBD), as medical therapy to treat disease or alleviate symptoms most notably as an antiemetic - a drug that is effective against vomiting and nausea.

In the 1970s, a synthetic version of THC, the primary active ingredient in cannabis, was synthesized to make the pharmaceutical product drug, Marinol. Marinol is widely available through prescription. It comes in the form of a pill and is also being studied by researchers for suitability via other delivery methods, such as an inhaler or patch. The active ingredient of Marinol is synthetic THC, which has been found to relieve the nausea and vomiting associated with chemotherapy for cancer patients and to assist with loss of appetite with AIDS patients.

Marijuana is one of the most beneficial and therapeutically active substances known to man.

The cannabis plant has been used for medicinal purposes for approximately 4,000 years. Writings from ancient India confirm that its psychoactive properties were recognized, and doctors used it for a variety of illnesses and ailments. These included a whole host of gastrointestinal disorders, insomnia, headaches and as a pain reliever frequently used in childbirth. Its usage in modern times is controversial. 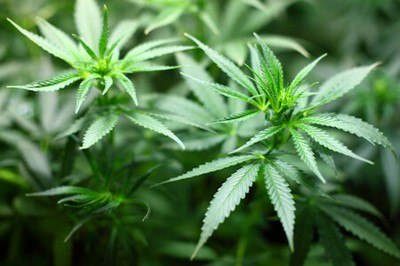 Close up photography of the top of green marijuana leaves on a juvenile cannabis plant.

Few herbs can offer a wide variety of therapeutic applications like these:

"With the expansiveness that occurs with marijuana, the subject may begin to notice infinite possibilities to raise the quality of his/her life that would otherwise have remained hidden from normal, defensive consciousness. And feelings of health and happiness naturally lead to hope, which of itself can be curative." - Joan Bello

Recent studies have shown the drug to be efficacious in treating mood disorders and mental health issues such as depression, post traumatic stress disorder, clinical depression, obsessive-compulsive disorder, panic disorder, and bipolar disorder. As a bronchodilator it is beneficial for asthma patients. It can also reduce intraocular pressure and is indicated for glaucoma. In addition it is also indicated for premenstrual syndrome, hypertension, and insomnia, and is also reported to be an effective treatment for constipation and alcohol hangovers.

Medical marijuana can also benefit you psychologically and spiritually:

Many obsessions or quick fixes to psychological problems can be elevated by Marijuana as well. Many people eat because they're depressed. If the depression is treated, the obsession to eat should be gone as well. Any of these physiological conditions can be treated by a psychiatrist; marijuana should be an alternative therapy, used in conjunction with psychiatric therapy.

Marijuana can be used to enhance personal Spirituality. The herb tends to reveal your true self. It uncovers inner confusion and reveals your true direction - if you let it. Marijuana offers an effect that is both energizing and relaxing at the same time. This balanced effect will help some to think more clearly and more efficiently afterwards.

"Marijuana will not tolerate repression. Tranquillizers and depressants relax the body and release tension, but the state of mind associated with these drugs is "unconsciousness" whereby we escape rather than resolve our dilemmas. Alcoholism is an extreme need of both the body and personality sometimes to release the nervousness that has accumulated and continues to build up to an unbearable degree. It serves the same function for the collective personality for the society, as well A culture in which alcohol and tranquillizers are the prevalent form of release prefers not to witness internal confusion and actually choose to act without conscious participation, maintaining a semi-numb condition." - Joan Bello

"Marijuana can act as the loosening agent, so that whatever has been banned from consciousness may come cascading forth. To uncover our deceptions without our usual rationalizations can be unpleasant, an experience that has turned many psychologically fragile individuals away from marijuana despite its therapeutic catharsis." - Joan Bello.

There have been testimonies from opiate users that report an easing of addiction cravings.

Some cannabinoids in cannabis are believed to have similar effects as Ibogaine, a medication used to treat heroin addiction.

Disabled World is an independent disability community founded in 2004 to provide disability news and information to people with disabilities, seniors, their family and/or carers. See our homepage for informative reviews, exclusive stories and how-tos. You can connect with us on social media such as Twitter and Facebook or learn more about Disabled World on our about us page.