Synopsis: Scientists coaxed stem cells to take on the characteristics and functions of a human adrenal gland, a progress that could lead to new therapies for adrenal insufficiencies. People with adrenal gland disorders, such as primary adrenal insufficiency, in which the gland does not release sufficient hormones, can suffer fatigue, dangerously low blood pressure, coma, and even death if untreated. In a new study, researchers coaxed stem cells in a petri dish to divide, mature, and take on some functions of a human fetal adrenal gland.

Sitting atop the kidneys, the adrenal gland plays a pivotal role in maintaining a healthy body. Responding to signals from the brain, the gland secretes hormones that support critical functions like blood pressure, metabolism, and fertility.

A preferable alternative would be a regenerative medicine approach, regrowing a functional adrenal gland capable of synthesizing hormones and appropriately releasing them in tune with the brain's feedback. With a new study in the journal Developmental Cell, researchers from the University of Pennsylvania School of Veterinary Medicine coaxed stem cells in a petri dish to divide, mature, and take on some of the functions of a human fetal adrenal gland, bringing that goal one step closer.

"This is a proof-of-principle that we can create a system grown in a dish that functions nearly identically to a human adrenal gland in the early stages of development," says Kotaro Sasaki, senior author and an assistant professor at Penn Vet. "A platform like this could be used to understand the genetics of adrenal insufficiency better and even for drug screening to identify better therapies for people with these disorders."

Sasaki says his team aimed to use human inducible pluripotent stem cells (iPSCs), which can give rise to various cell types, to mimic the stages of normal human adrenal development. During this process, the cells would get directed to take on the characteristics of the adrenal gland. 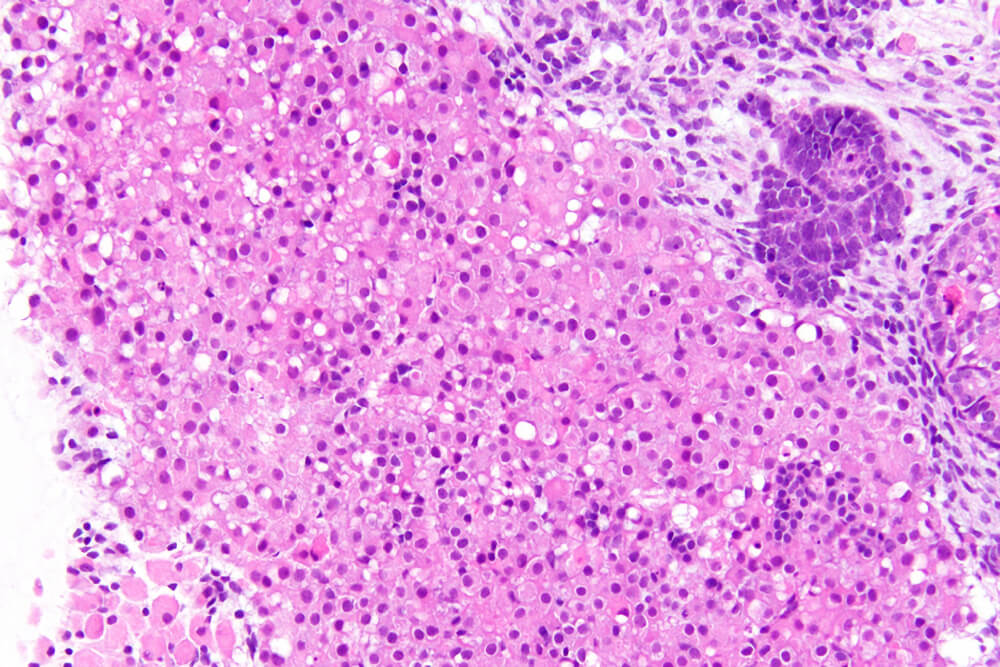 The structure and function of adrenal gland ‘organoids’ grown in a petri dish at the University of Pennsylvania School of Veterinary Medicine closely replicated that of the human adrenal gland, according to a new study - Image Credit: Sasaki Laboratory - Penn Vet.

To begin, the researchers used what's known as an "organoid culture" system, in which cells grow first as a floating aggregate for three weeks, then on a membrane exposed to air on one side, promoting better survival and allowing them to increase in three dimensions. Utilizing a carefully selected growth medium, they prompted the iPSCs to elicit an intermediate tissue type in the adrenal development process, the posterior intermediate mesoderm (PIM).

After verifying they had cultured PIM-like cells, the researchers directed those cells to transition to the next stage, adrenocortical progenitor-like cells, during which cells turn on markers indicating they have "committed" to becoming adrenal gland cells.

Molecular assays to check for adrenal markers and transmission electron microscope analyses all told Sasaki and colleagues they were on the right track to recreating a tissue resembling the early adrenal gland.

"The process we developed was highly efficient, with around 50% of cells in organoids acquiring adrenocortical cell fate," says Michinori Mayama, a postdoc in Sasaki's lab and a lead author on the study. "The ovoid cells with voluminous pink cytoplasm and relatively small nuclei that we saw in our cultures are very characteristic of human adrenal cells at that stage."

Sasaki, Mayama, and the rest of the research team performed several tests to evaluate how closely the functionality of the cells they had cultivated mirrored that of a human adrenal gland. They found that lab-grown cells produced steroid hormones, like DHEA, just as the "real-life" equivalent would.

"In vitro, we can produce much of the same steroids that are produced in vivo," Mayama says.

They also showed that the cells they grew could respond to what's known as the hypothalamic-pituitary-adrenal axis, a feedback loop that governs communication from the brain to the adrenal gland and back again.

As the researchers refine their system, they hope to generate more of the gradations in tissue type that occur in a mature adult adrenal gland.

Such a platform opens opportunities to learn more about the still-mysterious adrenal gland. In particular, Sasaki notes that it could be leveraged to probe the genetic basis of adrenal insufficiencies and other diseases, such as adrenal carcinomas. Ultimately, the approach used to create this gland-in-a-dish may one day work to reconstitute a functioning brain-adrenal gland feedback loop in people with adrenal gland disorders.

"This is a first-of-its-kind study," says Sasaki. "The field of cell therapy holds so much promise for treating not just adrenal insufficiencies but other hormone-driven diseases: hypertension, Cushing syndrome, polycystic ovary syndrome, and more."

Notes Regarding the Study

Recreating Adrenal Gland from Stem Cells | University of Pennsylvania (upenn.edu). Disabled World makes no warranties or representations in connection therewith. Content may have been edited for style, clarity or length.

Disabled World provides general information only. The materials presented are never meant to substitute for professional medical care by a qualified practitioner, nor should they be construed as such. Financial support is derived from advertisements or referral programs, where indicated. Any 3rd party offering or advertising does not constitute an endorsement.