Bill Kochevar grabbed a mug of water, drew it to his lips and drank through the straw. His motions were slow and deliberate, but then Kochevar hadn't moved his right arm or hand for eight years. And it took some practice to reach and grasp just by thinking about it.

Kochevar, who was paralyzed below his shoulders in a bicycling accident, is believed to be the first person with quadriplegia in the world to have arm and hand movements restored with the help of two temporarily implanted technologies.

A brain-computer interface with recording electrodes under his skull, and a functional electrical stimulation (FES) system* activating his arm and hand, reconnect his brain to paralyzed muscles.

Holding a makeshift handle pierced through a dry sponge, Kochevar scratched the side of his nose with the sponge. He scooped forkfuls of mashed potatoes from a bowl--perhaps his top goal--and savored each mouthful.

"For somebody who's been injured eight years and couldn't move, being able to move just that little bit is awesome to me," said Kochevar, 56, of Cleveland. "It's better than I thought it would be." 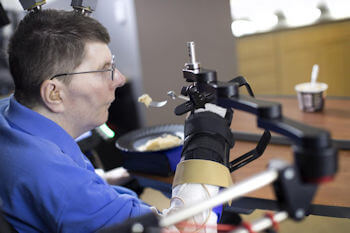 Bill Kochevar, who was paralyzed below his shoulders in a bicycling accident, is believed to be the first person with quadriplegia in the world to have arm and hand movements restored with the help of two temporarily implanted technologies. Photo Credit: Case Western Reserve University/Cleveland FES Center.

Kochevar is the focal point of research led by Case Western Reserve University, the Cleveland Functional Electrical Stimulation (FES) Center at the Louis Stokes Cleveland VA Medical Center and University Hospitals Cleveland Medical Center (UH). A study of the work will be published in the The Lancet March 28 at 6:30 p.m. U.S. Eastern time.

"He's really breaking ground for the spinal cord injury community," said Bob Kirsch, chair of Case Western Reserve's Department of Biomedical Engineering, executive director of the FES Center and principal investigator (PI) and senior author of the research. "This is a major step toward restoring some independence."

When asked, people with quadriplegia say their first priority is to scratch an itch, feed themselves or perform other simple functions with their arm and hand, instead of relying on caregivers.

"By taking the brain signals generated when Bill attempts to move, and using them to control the stimulation of his arm and hand, he was able to perform personal functions that were important to him," said Bolu Ajiboye, assistant professor of biomedical engineering and lead study author.

The research with Kochevar is part of the ongoing BrainGate2* pilot clinical trial being conducted by a consortium of academic and VA institutions assessing the safety and feasibility of the implanted brain-computer interface (BCI) system in people with paralysis. Other investigational BrainGate research has shown that people with paralysis can control a cursor on a computer screen or a robotic arm.

"Every day, most of us take for granted that when we will to move, we can move any part of our body with precision and control in multiple directions and those with traumatic spinal cord injury or any other form of paralysis cannot," said Benjamin Walter, associate professor of Neurology at Case Western Reserve School of Medicine, Clinical PI of the Cleveland BrainGate2 trial and medical director of the Deep Brain Stimulation Program at UH Cleveland Medical Center.

"The ultimate hope of any of these individuals is to restore this function," Walter said. "By restoring the communication of the will to move from the brain directly to the body this work will hopefully begin to restore the hope of millions of paralyzed individuals that someday they will be able to move freely again."

Jonathan Miller, assistant professor of neurosurgery at Case Western Reserve School of Medicine and director of the Functional and Restorative Neurosurgery Center at UH, led a team of surgeons who implanted two 96-channel electrode arrays--each about the size of a baby aspirin--in Kochevar's motor cortex, on the surface of the brain.

The arrays record brain signals created when Kochevar imagines movement of his own arm and hand. The brain-computer interface extracts information from the brain signals about what movements he intends to make, then passes the information to command the electrical stimulation system.

To prepare him to use his arm again, Kochevar first learned how to use his brain signals to move a virtual-reality arm on a computer screen.

"He was able to do it within a few minutes," Kirsch said. "The code was still in his brain."

As Kochevar's ability to move the virtual arm improved through four months of training, the researchers believed he would be capable of controlling his own arm and hand.

Miller then led a team that implanted the FES systems' 36 electrodes that animate muscles in the upper and lower arm.

The BCI decodes the recorded brain signals into the intended movement command, which is then converted by the FES system into patterns of electrical pulses.

The pulses sent through the FES electrodes trigger the muscles controlling Kochevar's hand, wrist, arm, elbow and shoulder. To overcome gravity that would otherwise prevent him from raising his arm and reaching, Kochevar uses a mobile arm support, which is also under his brain's control.

Kochevar can make each joint in his right arm move individually. Or, just by thinking about a task such as feeding himself or getting a drink, the muscles are activated in a coordinated fashion.

When asked to describe how he commanded the arm movements, Kochevar told investigators, "I'm making it move without having to really concentrate hard at it...I just think 'out'...and it goes."

Kocehvar is fitted with temporarily implanted FES technology that has a track record of reliable use in people. The BCI and FES system together represent early feasibility that gives the research team insights into the potential future benefit of the combined system.

Advances needed to make the combined technology usable outside of a lab are not far from reality, the researchers say. Work is underway to make the brain implant wireless, and the investigators are improving decoding and stimulation patterns needed to make movements more precise. Fully implantable FES systems have already been developed and are also being tested in separate clinical research.

Kochevar welcomes new technology--even if it requires more surgery--that will enable him to move better. "This won't replace caregivers," he said. "But, in the long term, people will be able, in a limited way, to do more for themselves."

The investigational BrainGate technology was initially developed in the Brown University laboratory of John Donoghue, now the founding director of the Wyss Center for Bio and Neuroengineering in Geneva, Switzerland. The implanted recording electrodes are known as the Utah array, originally designed by Richard Normann, Emeritus Distinguished Professor of Bioengineering at the University of Utah.

The report in today's Lancet is the result of a long-running collaboration between Kirsch, Ajiboye and the multi-institutional BrainGate consortium. Leigh Hochberg, MD, PhD, a neurologist and neuroengineer at Massachusetts General Hospital, Brown University and the VA RR&D Center for Neurorestoration and Neurotechnology in Providence, Rhode Island, directs the pilot clinical trial of the BrainGate system and is a study co-author.

"It's been so inspiring to watch Mr. Kochevar move his own arm and hand just by thinking about it," Hochberg said. "As an extraordinary participant in this research, he's teaching us how to design a new generation of neurotechnologies that we all hope will one day restore mobility and independence for people with paralysis."

Source/Reference: Case Western Reserve University (case.edu). Disabled World makes no warranties or representations in connection therewith. Content may have been edited for style, clarity or length.

You're reading Disabled World. Be sure to check out our homepage for further informative disability news, reviews, exclusive stories and how-tos. You can also follow Disabled World on social media sites such as Twitter, Facebook, and LinkedIn.

Disclaimer: Disabled World provides general information only. Materials presented are in no way meant to be a substitute for professional medical care by a qualified practitioner, nor should they be construed as such. Any 3rd party offering or advertising on disabled-world.com does not constitute endorsement by Disabled World. View our Advertising Policy for further information. Please report outdated or inaccurate information to us.