Team captain Bornor and midfielder Census are amputees who play organized soccer in Sierra Leone to cope with the horrors of war they suffered a decade ago.

The Flying Stars are an amputee soccer (football) team based in Freetown, Sierra Leone. The players have one leg or one arm.

Though rich in minerals and diamonds, Sierra Leone remains one of the poorest countries on Earth, with infrastructure still being rebuilt from the war.

Team captain Bornor Kargbo and midfielder Census Jalloh are amputees who play organized soccer in Sierra Leone to cope with the horrors of war they suffered a decade ago. As they dream of competing internationally, they wrestle with nightmares that haunt their daily lives and threaten the very families they are trying to feed. Can Bornor and Census overcome their postwar trauma and score a victory for their children off the soccer pitch?

On the beaches of Freetown, Sierra Leone overlooking the Atlantic Ocean, a dozen wiry soccer players leap and race across the golden sand playing the beautiful game. However, these are no ordinary footballers, but one-legged amputees.

Bornor Kargbo leads The Flying Stars football club. All his players survived Sierra Leone's brutal civil war of the 90's when they were amputated by rebel soldiers or stepped on enemy landmines.

Today, they play soccer to battle the trauma they still endure: 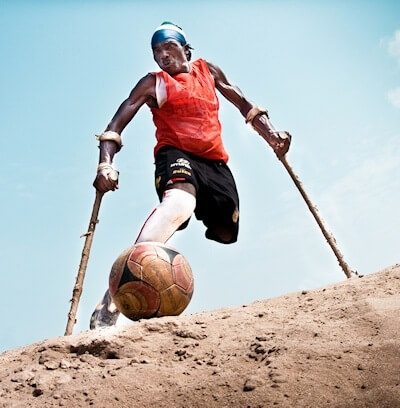 Bornor was a soldier in the army, fighting rebels who attacked Sierra Leone from 1991-2002. He defied skeptics by competing on several soccer pitches around the world. Today, he dreams of playing one more time abroad before retiring. Meanwhile, he raises a family, including his wife Manoir, on meager earnings from begging.

Bornor's dependable teammate, Mohammed "Census" Jalloh, also dreams of playing abroad, but right now he's building a modest house to shelter his young son and is looking for work to put his boy through school. Bornor, Census and their teammates rely on a weekly stipend from their team practice until their sponsor ends this payment. Suddenly, Bornor and Census must find another way to earn money to survive and feed their children. At the same time, they wrestle with memories of the war that linger in their limbs and souls like a rainstorm that never completely goes away.

Filmmakers Ngardy Conteh George and Allan Tong explore the lives of Bornor and Census as they try to live up to their team name, The Flying Stars, reaching for their dreams on and off the soccer pitch. 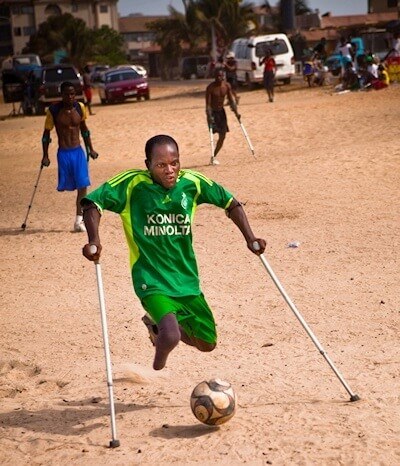 Who are The Flying Stars?

The Flying Stars are an amputee soccer (football) team based in Freetown, Sierra Leone. The players have one leg or one arm.

Captain Bornor Kargbo and midfielder Mohammed "Census" Jalloh explains they chose the team nickname to reflect their dreams of soaring like flying stars on the soccer pitch and in their personal lives.

Where is Sierra Leone?

Sierra Leone is a small, tropical country in west Africa with a population of six million. Sadly, war has ravaged this nation for many decades after its 1961 independence from Britain. The civil war of 1991-2002 produced thousands of young amputees, two of whom are profiled in The Flying Stars.

Though rich in minerals and diamonds, Sierra Leone remains one of the poorest countries on Earth, with infrastructure still being rebuilt from the war.

Why make this film?

In 2008, filmmaker Allan Tong caught sight of photographs of Sierra Leonean amputee soccer players as shot by New York photographer Fiona Aboud. He was amazed by her images of one-legged men tearing down the soccer pitch and leaping through the air, and immediately contacted Fiona to get in contact with the players. Around the same, Ngardy Conteh George was editing a short documentary of Allan's. He invited her to cut this new doc about the amputees. By coincidence, Ngardy was born in Freetown, Sierra Leone, though raised in Toronto, Canada. (Allan is Chinese-Canadian.)

Watch the website for upcoming diary postings about the various shoots in Freetown and across Sierra Leone, including the evening we nearly got stranded in the sweltering countryside.

What is this film's connection to Sundance?

This film was supported by a grant from the Sundance Institute Documentary Film Program. In fall 2011, the filmmakers applied for funding from the Sundance Documentary Institute and were chosen from hundreds of applications. The filmmakers also applied for a fellowship and again received one, invited to Sundance in 2012 to pitch their film to buyers and broadcasters and attend many helpful workshops about documentaries. Thank you, Sundance.

Allan and Ngardy won the 2011 Telefilm Canada Pitch This! Competition where six teams of filmmakers present their film live onstage to an audience and jury of film professionals. Allan and Ngardy won a cash prize and the kind of publicity they couldn't buy.

How do you pronounce "Ngardy"?

(i)Source/Reference: The Flying Stars. Disabled World makes no warranties or representations in connection therewith. Content may have been edited for style, clarity or length.

• Disabled World is strictly a news and information website provided for general informational purpose only and does not constitute medical advice. Materials presented are in no way meant to be a substitute for professional medical care by a qualified practitioner, nor should they be construed as such. Any 3rd party offering or advertising on disabled-world.com does not constitute endorsement by Disabled World. Please report outdated or inaccurate information to us.