RAD audio based interface can easily be integrated into existing video games, enabling the blind to play video games with the same speed and control as sighted players, with full 3D graphics and complex challenging racetracks.

The RAD, an audio-based interface that can easily be integrated into existing video games, enables people who are visually impaired to play video games with the same speed and control as sighted players, with full 3D graphics and complex, challenging racetracks

Brian A. Smith, a PhD candidate in Computer Science at Columbia Engineering, has developed the RAD-a racing auditory display- to enable gamers who are visually impaired to play the same types of racing games that sighted players can play with the same speed, control, and excitement that sighted players experience. The audio-based interface, which a player can listen to using a standard pair of headphones, can be integrated by developers into almost any racing video game, making a popular genre of games equally accessible to people who are blind. VIDEO: below. 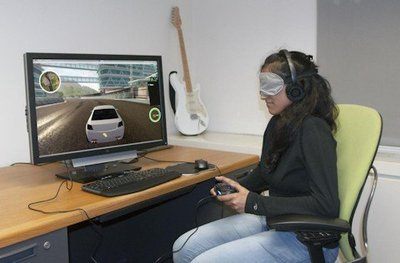 "The RAD is the first system to make it possible for people who are blind to play a 'real' 3D racing game-with full 3D graphics, realistic vehicle physics, complex racetracks, and a standard PlayStation 4 controller," says Smith, who worked on the project with Shree Nayar, T.C. Chang Professor of Computer Science. "It's not a dumbed-down version of a racing game tailored specifically to people who are blind."

While there are a number of games on the market suitable for the blind, many are loaded with competing sources of information that players must sift through, slowing down the fun of playing the game. Others are versions of popular games so simplified that a blind gamer does nothing more than follow orders. There has been a fundamental tradeoff between preserving a game's full complexity and its pace when making it blind-accessible.

"Our challenge," says Smith, "was to give visually impaired players enough information about the game so that they could have the same sense of control and thrill that sighted players have, but not so much information that they would get overwhelmed by audio overload or bogged down in just figuring out how to interpret the sounds."

Smith's work builds on two distinct areas of research: building audio navigation systems and developing blind-accessible racing games and driver assistance systems. The RAD comprises two novel sonification techniques: a sound slider for understanding a car's speed and trajectory on a racetrack, and a turn indicator system for alerting players about upcoming turns well in advance of the actual turns. Together, these approaches enable players to understand aspects about the race and perform a wide variety of actions in a way that is not possible in current blind-accessible racing games. Smith's aim was to design an interface that would give players enough relevant information to form a plan of action.

"The RAD's sound slider and turn indicator system work together to help players know the car's current speed; align the car with the track's heading; learn the track's layout; profile the direction, sharpness, timing, and length of upcoming turns; cut corners; choose an early or late apex; position the car for optimal turning paths; and know when to brake to complete a turn," says Smith. He will present his paper at ACM CHI 2018's Conference on Human Factors in Computing Systems April 21-26 in Montreal, the leading international conference for Human-Computer Interaction.

Smith designed the RAD and then built a prototype car racing game in Unity, the most popular game engines in the world, and integrated the RAD into that prototype. He ran two studies with 15 participants he recruited through the Brooklyn-based Helen Keller Services for the Blind and volunteers at Columbia.

The players preferred the RAD's interface over that of Mach 1, a popular blind-accessible racing game. One player commented that at times he felt like he had as much information as if he could actually see the track. Another gamer, Edis Adilovic, had played Top Speed, a blind-friendly racing game before, but the RAD was the first time he played a video game with realistic vehicle physics. He was able to race on a complex racetrack as well as casual sighted players could.

"With the RAD, Edis could not only play our prototype racing game, but do so with the same lap times and driving paths as sighted players," Smith notes.

Adilovic liked the fact that, unlike other blind-friendly racing games, the RAD did not constantly tell him to "do this, do that," and added that, "After the training was done, I had the possibility of doing whatever I wanted to."

Smith is planning his next steps, which include incorporating more racing game elements such as rival vehicles. He also hopes to create similar systems for other genres of games, including adventure games, role-playing games, and first-person shooters. "My hope," he adds, "is that game designers will soon be able to build game systems from a suite of tools that are similarly intuitive and functional to the RAD, and make their video games equally accessible to people who are blind. We think the RAD marks the beginning of a whole new suite of such tools."

(i)Source/Reference: Columbia University School of Engineering and Applied Science. Disabled World makes no warranties or representations in connection therewith. Content may have been edited for style, clarity or length.

If you use an RSS feed reader you are welcome to subscribe to our latest Games - Gaming publications.